Cyril Ramaphosa is the fifth democratically elected President of The Republic of South Africa. He doubles as the president of the African National Congress since 2017. He is an entrepreneur, an anti-apartheid activist, a philanthropist and a trade union leader. 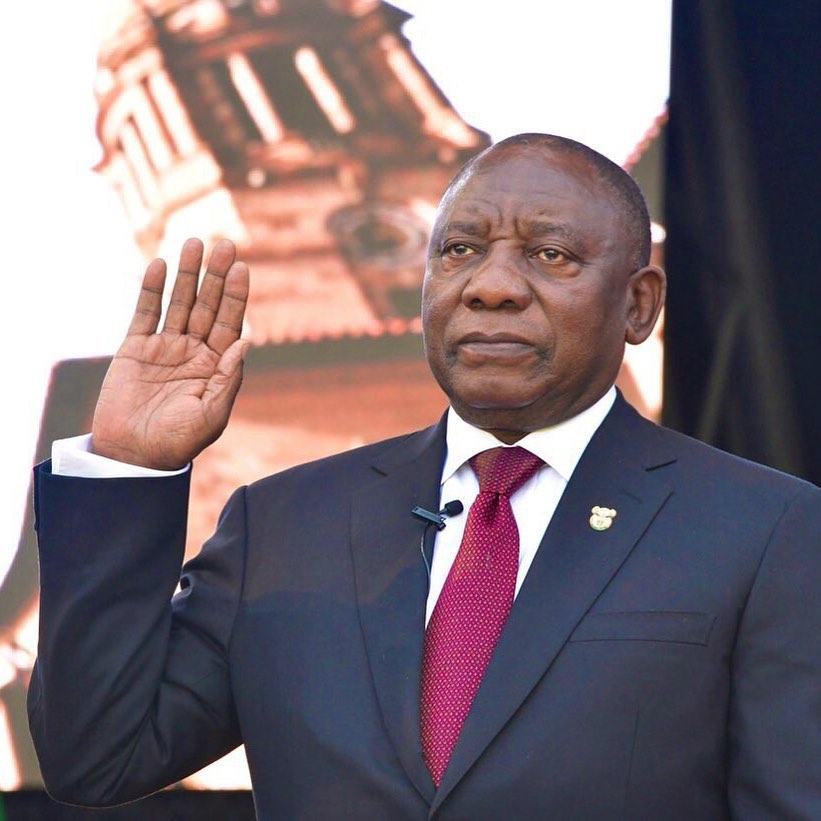 Born on the 17th November 1952, Metamela Cyril Ramaphosa, in Soweto, Johannesburg to Venda parents. He is the second of the three children of his parents, Erdmuthe and retired police officer, Samuel Ramaphosa. He started his educational career at Tshilidzi Primary school and attended Sekano Ntoane High School in Soweto.

Cyril also attended Mphaphuli High School in Sibasa in northern Transvaal in 1971 to complete his senior certificate education. Subsequently, he got admitted into the Turfloop University, Limpopo province where he studied law in 1972. While in school, he joined student politics, becoming the 1974 chairman of the South African Student’s Organization and the Student Christian Movement.

Cyril was a jovial person. He knew and liked many of his colleagues and had Steve Biko as his role model. In 1974, he volunteered for some organizations like the Black People’s Convention while serving with a firm of attorneys in Johannesburg.

In the mid-1970s, Security agencies detained severally Cyril along with other student activists. First, in 1974, when he was detained for eleven months in Pretoria Central Prison. In 1976, they detained him for another six months in the infamous John Vorster Square detention centre in Johannesburg.

After his release, he became a law clerk for a Johannesburg firm of attorneys. He also continued with his legal studies by correspondence at the University of South Africa where he obtained his B. Proc. Degree in 1981.

After Cyril completed his law degree, he joined the Council of the Union of South Africa (CUSA). He worked as a Legal Advisor and in 1982; he established the National Union of Mineworkers (NUM) based on the request of the council.

Subsequently, he became the first General Secretary of the group and was actively involved in the establishment of the Congress of South Africa Trade Union (COSATU). Ramaphosa was the conference organiser. He delivered a keynote address at one of COSATU’s rallies in Durban in December 1985. In 1986, he was also part of COSATU’s delegation which met the African Congress in Lusaka, Zambia.

Under his leadership as the general secretary, the union membership grew larger. It got bigger and started giving it control of half of the black workforce in the South African mining industry. Also, he alongside James Motlatsi and Elijah Barayi, led the mineworkers in one of the biggest strikes in South African.

Aside from that, he served as the chairperson of the National Reception Committee and spearheaded the release of Nelson Mandela. In 1991; he headed African National Congress‘s negotiation team, in negotiating the end of apartheid with the government.

After the first democratic elections in South Africa in 1994, Cyril became a member of the parliament and was elected as the chairperson of its constitutional Assembly on the 24th May 1994. He played a central role in the government of national unity at that period.

Subsequently, Cyril contested for the South African Presidential post. However, he lost to Thabo Mbeki, which led to him resigning from his political post in January 1997. He later moved to the private sector where he became the director of New Africa Investments Limited. In 1997, he came first place in the 1997 election to the ACN’s National Executive Committee.

Eventually, on the 25th of May 2014, Jacob Zuma appointed Cyril Ramaphosa as the Deputy President. The Following day, Chief Justice Mogoeng Mogoeng swore him in into office. Subsequently, he assumed the position of the Leader of Government Business in the National Assembly under Section 91 (4) of the constitution.

Subsequently, after President Jacob Zuma resigned as the President of South Africa, the National Assembly elected Cyril Ramaphosa unopposed as the newly elected president of the country on the 15th of February 2018. Cyril took the oath of office in the President’s guesthouse, Tuynhuys, preceded by Chief Justice Mogoeng Mogoeng.

In his speech, Mr President addressed the need to boost South Africa’s economy, ensure youth employment and increase tourism as well as reduce the size of the country’s Cabinet. He also emphasized the need to keep Nelson Mandela’s legacy alive, in his speech.

Cyril’s speech was an outstanding one and was met with mostly positive reviews from opposition parties. His opponents acknowledged his intentions, saying his speech would bring about change to the country but they promised to hold him accountable.

As the President, Cyril Ramaphosa made remarkable achievements. Among them was that he made land reformation and the economy of the country priorities. He also dealt with the outbreak of Listeriosis which claimed the lives of over 100 people in South Africa as of March 2018.

Also, at the 2020 African Union Summit, President Cyril pledged his support for the Africa Continental Free Trade Area. He as well declared his support to ensure gender equality in South Africa.

In fulfilling his agenda, Mr President launched the Youth Employment Serves (YES), an initiative that employed youths and gives them working experience in various fields works. He also founded the Sanitation Appropriate for Education (SAFE), an organisation responsible for solving sanitary challenges facing the poorest schools in South Africa. His government also responded well to the 2021 South African unrest which was the deadliest riots since apartheid.

As part of this political philanthropy, Cyril on the 24th of May 2018 announced to the world that he would donate half of his salary (R3,6 million annually) to charity in honour of the late former South African President, Nelson Mandela.

Cyril Ramaphosa started his business career as a farmer. During one of his visits to Uganda in 2004, Mr President became interested in livestock farming particularly in keeping the Ankole cattle breed. However, because of the inadequate disease control measures in Uganda, South Africa refused Cyril’s plan of importing the cattle breed into the country.

That didn’t stop Cyril’s ambition, he then purchased 43 cows from the then Ugandan President, Yoweri Museveni and had the cattle shipped to Kenya and eventually back to South Africa after they have artificially inseminated the animals. As of August 2017,  Cyril Ramaphosa became the owner of 100 Ankole breeding cows at his Ntaba Nyoni farm in Mpumalanga.

President Cyril is a versatile man as he was an executive chairman of Shanduka Group, a company he founded after his resignation from the parliament in 1997. Shanduka Group has investments in various resources sector such as real estate, energy sector, insurance, banking and telecoms.

He was also the chairman of Bidvest and MTN. Cyril was also a non-executive director in many other companies including Macsteel Holdings, Standard Bank and Alexander Forbes. In 2007, he was given the appointment of a non-executive joint chairman of Mondi, a leading international paper and packing group, when the company retired from Anglo-American PLC.

In 2011, Cyril paid for a 20-year franchise agreement to run 145 McDonald’s restaurants in South Africa. After the 2014 general election, he announced his disinvestment from Shanduka so that he would fulfil to the fullest his duty as the deputy president then.

Cyril Ramaphosa is a skilled strategist and negotiator. He was the ANC’s chief Negotiator during South Africa’s transition to democracy in 1994 and established the National Union of Mineworkers (NUM), the biggest and most powerful trade union in the History of South Africa.

Cyril also led in other capacities as included below:

Cyril Ramaphosa is a private person and doesn’t put much out about his personal life. He was previously married to Hope Ramaphosa within the year 1978 to 1989 but eventually got divorced. Hope birthed a son for Cyril but they later got divorced. In 1991, Cyril got married to the late businesswoman Nomazizi Mtshotshisa and unfortunately got divorced in 1993.

Despite having two unsuccessful marriages, Cyril did not give up on relationships. A few years later after his divorce, he remarried and wedded Tshepo Motsepe, a medical doctor who doubles as the sister of South African mining billionaire, Patrice Motsepe. Ramaphosa has five recognized children.

Cyril is a polyglot and is recognized for using several South African languages when delivering most of his speeches. He is as well the founder of the Cyril Ramaphosa Foundation.

Cyril Ramaphosa was dragged and held responsible for the outburst that happened in Marikana. The Marikana massacre as tagged by the media, occurred when the South African police broke up an occupation by striking Lonmin workers of a ‘Koppe’ near Nkaneng shack settlement in Marikana on the 16th of August 2012.

Because of the shooting, 34 miners were reported dead and about 78 miners were injured causing anger and outcry against the South African government. Further controversy also emerged after it was discovered that most of the victims of the massacre were shot in the back while many others were shot far from police lines. The Marikana violence was the single most lethal use of force by South African security forces against civilians ever since the apartheid ended.

In 2017, Cyril was involved in another scandal as he was alleged to had several extramarital affairs. He was also alleged to be involved in paying money to individuals while maintaining the affairs. Later, Cyril denied the allegation claiming they were politically motivated to disrupt his presidential campaign.

Cyril Ramaphosa has worldwide gained remarkable recognition and has been awarded several awards and honorary doctorates. In 2016, he was the first Chancellor of the University of Mpumalanga and received other honorary doctorates degrees from the institutions below:

Some of his other awards include;

The President of South Africa, Cyril Ramaphosa has a net worth of $450 Million. This 70-year-old political mogul is one of the richest men in South Africa and also part of the rare politicians in Africa who has earned his wealth outside politics.

Cyril receives more than $3 million monthly and an estimated amount of $37 million as yearly income. He is a very successful politician and a successful entrepreneur. Mr President also owns several luxury mansions among them including the foot of Lion’s Head in Cape Town. He has also appeared in financial magazines such as Bloomberg and Forbes Africa.