Chief Godswill Obot Akpabio, CON, is a Nigerian lawyer and politician, a former Senate Minority Leader and Senator of the Federal Republic of Nigeria. He has also served as Governor of Akwa Ibom State, Nigeria from May 29, 2007, to May 29, 2015.  He is the past Minister of Niger Delta Affairs as he resigned on 11-05-20222 under Muhammad Buhari to pursue his presidential aspiration of becoming the President of the Federal Republic of Nigeria. 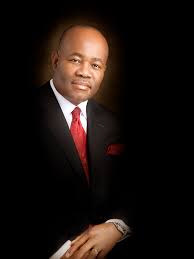 Godswill Akpabio is the son of Chief Obot Akpabio and Madam Lucy Obot Akpabio (née Inyangetor) of Ukana, Ikot Ntuen in Essien Udim Local Government Area. He was born on 9 December 1962. He lost his father at an early age and was raised by his mother.

Akpabio was educated at Methodist Primary School, Ukana, Essien Udim LGA, Akwa Ibom State; the Federal Government College, Port Harcourt, Rivers State; and the University of Calabar, Cross River State, where he obtained a Degree in Law. While at the Federal Government College, Port Harcourt, he was appointed the Senior Prefect. At the University of Calabar, Akpabio was elected as the speaker of the student parliament.

Akpabio’s career started as a teacher and had a brief stint with Paul Usoro and Co – a law firm in Nigeria. He was also a school teacher for a brief period. He also worked with EMIS Telecoms Ltd, a Lagos-based telecommunication company, he had earlier served as the National Publicity Secretary of the Association of Telecommunication Companies in Nigeria, (ATCOM), while a director of EMIS. He later became the CEO of that company in 2002. Godswill Akpabio was appointed as Commissioner for Petroleum and Natural Resources in 2002 under the administration of Obong Victor Attah in Akwa Ibom State. Before 2006, he had served in other capacities such as Commissioner for Lands & Housing as well as Commissioner for Local Government & Chieftaincy Affairs. He became the Peoples Democratic Party’s flag bearer in the 2007 gubernatorial election, having defeated 57 other aspirants at the primary election.  He became the Governor of Akwa Ibom State in 2007 and spent additional four years after the end of his first tenure.

2015, Akpabio was made the Senate Minority Leader by the People’s Democratic Party’s South-South group within the National Assembly. The success of APC in the 2015 election took away the “Power of Majority” from the PDP caucus in the Senate. Akpabio resigned in 2018 as the Senate Minority Leader after defecting to the ruling party, APC. He was appointed minister of the federal republic by President Muhammadu Buhari in 2019. He was sworn in as the Minister for Niger Delta Affairs on the 21st of August, 2019 before resigning to contest for the presidency.

Akpabio’s grandfather, Okuku Udo Akpabio, was the Warrant Chief in Ikot Ekpene province. His uncle, Dr I. U. Akpabio, was the Minister of Education/Internal Affairs in the old Eastern Region of Nigeria. Justice Nsima Akpabio, his cousin, was a senator in the Second Nigerian Republic.

Akpabio is married to Ekaette Unoma Akpabio, the founder of the Family Life Enhancement Initiative (FLEI), a non-governmental organization providing a platform for redirecting the focus of development efforts on the family as a strategy for achieving the Millennium Development Goals (MDGs).

Akpabio and his wife have four daughters and a son.

Godswill Akpabio was under investigation by the Economic and Financial Crimes Commission (EFCC) on accusations that he diverted over 100 billion Naira from Akwa Ibom State during his time as governor (2007-2015) with an American diplomat calling the level of corruption “exceptional” during his tenure. However, no charges have been filed. A lawyer, Leo Ekpenyong who also accused Akpabio of corruption, was later arraigned by the police in court for defamation.

In 2008, Sahara Reporters claimed Akpabio gave a $500,000 Mercedes Benz GL 450 to Farida Waziri, the Chairwoman of the Economic and Financial Crimes Commission (EFCC). In an attempt to debunk the corruption case, Akpabio arranged for certain reporters to have a private viewing that the car was in fact one of those in the governor’s security details. The ploy was uncovered when the chassis number WDC 1648722A390877 on that displayed car was different from the car that was given as a bribe to Waziri, which had chassis number WDC 1648711A 390877.

Another damning evidence against Akpabio was that the car’s licence plate SB 456 AAA, which Governor Akpabio claimed was in his security pool, was issued to one Chief C. Orizu of Adotolo Nnewi in Anambra State, and not to the Akwa Ibom State Government.

In May 2020, Akpabio was summoned by members of the House of Representatives over the misappropriation of 40 billion Naira.

Godswill Akpabio’s net worth has grown significantly over the years. However, his net worth is estimated to be $100 million.