Felicity Ama Agyemang (Born 15 August 1973) is popularly known as Nana Ama Mcbrown, she is a Ghanaian actress, Music writer, and TV presenter. She came to the limelight for her role in the television series Tentacles. Nana Ama is currently the host of the television cooking show McBrown Kitchen and entertainment talk show United Showbiz on UTV. 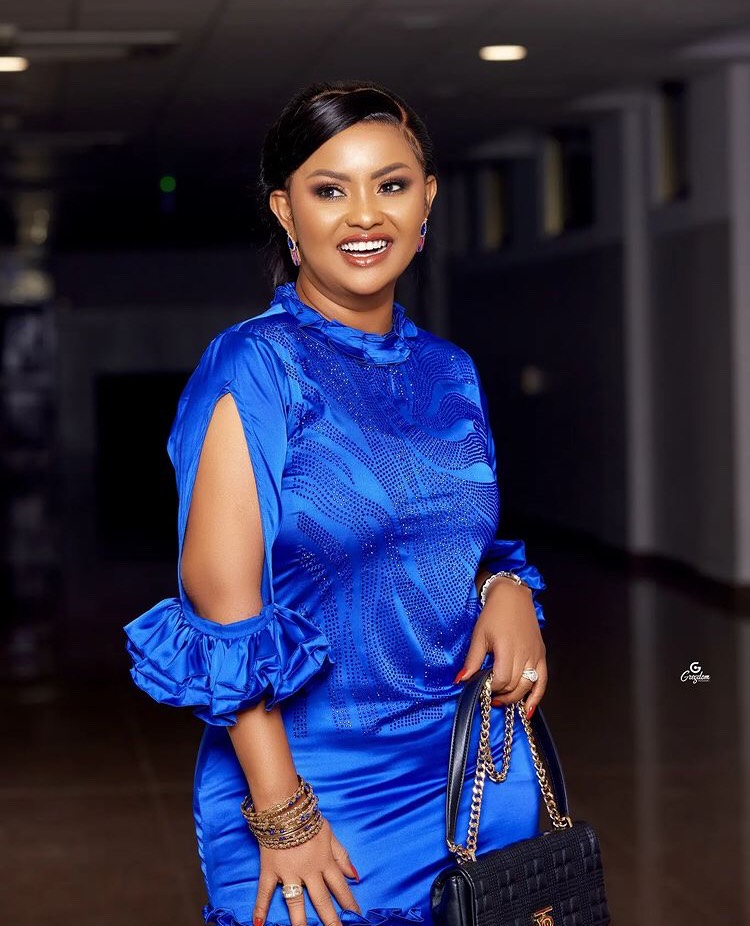 Nana Ama was born in Kumasi, Ghana, to Mr. Kwabena Nkrumah and Mrs. Cecilia Agyenim Boateng. Nana’s parents got divorced when she was young. She was adopted together with her siblings by Kofi McBrown and her aunt, Madam Betty Obiri Yeboah. Nana considers her aunt as her real mother, and she has spoken of her gratitude to her for taking care of her and her six siblings.

Nana Ama attended St. Peter’s International Residential School, she moved to Minnesota International, and then she moved to Central International. She also attended Kwadaso L. A J.S.S but she ended up as a dropout because of financial reasons and she could not sit for B.C.E.C. She obtained her secretarial certificate from the College of Business.

Nana Ama started her acting career after she answered an audition call on the radio by Mr. Michael Films, and she was hired to do costuming. However, on the set, she was given the lead role by Director Samual Nyamekye, as he thought she was more suitable for acting. Her first movie lands her a spot on the TV series Tentacles in the year 2001.

In 2007, in the movie titled “Asoreba“, co-starring Mercy Aseidu and Agya Koo, she gained massive attention, and ever since then, Nana has become a popular actress, and she slowly built a strong following by releasing a slew of critically acclaimed movies. She was appointed as an ambassador for the COVID-19 National Trust Fund in 2021.

Nana Ama is the brand ambassador for Royal Drink.

Nana Ama has been linked to Omar Sheriff Captain, her co-star in several movies, although both have denied any romantic attachment. She dated Okyeame Kwame, a Ghanaian musician, in 2014, and they both traveled to Ghana to promote Okyeame Kwame’s Solo release.

On July 15, 2007, she was enthroned as the “Queen Mother of the Development” (Nkosuohemaa)

As of now, Nana is married to her long-time boyfriend, named Maxwell Mawu Mensah, in the year 2016. In February 2019, she gave birth to her baby girl named Maxine in Canada.

Nana Ama almost lost her arm some years back, and she had to undergo surgery to keep her arm in normal shape. She said that she has undergone liposuction to help her body stay in good shape.

Nana Ama has won many awards in the movie industry, which include Best Traditional Movies, Best English Actress, and Best Actress in Lending Roles; she also won Best Story at the 2011 Kumawood Award. At the 2016 Ghana Movie Award, she won Favorite Actress and the European Best Dressed Female Celebrity on the red carpet. Nana also won the Golden Movie Awards in 2018.

In the year 2020, she won an award at the Ghana Outstanding Award Woman Awards (GOWA) for an Outstanding Woman Brand Influencer in the third edition in Ghana. She was awarded the Radio and Television personality Awards TV Female Entertainment Show Host of the year 2019/2020.

In March 2021, she was awarded the Female Actress of the Year at the Entertainment Achievement Awards.

Nana Ama is one of the most successful and influential actresses in Ghana, and her net worth was estimated to be $900, 000.