Nimrod Nkosi is a prominent Television presenter and actor from South Africa. He has spent several years of his life hosting and presenting live programs. He has appeared in a series of soap operas and dramas which includes Scandal, Hijack stories and family Secrets to mention but a few.

He not only acts and hosts live shows, but he also acts as Master of Ceremony for several high-class events in South Africa. As of this moment, Nimrod is the host of the popular Mzanzi Magic docu-series, “Utatakho”. 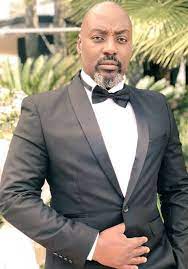 Nimrod Nkosi was born and raised in Johannesburg, in the Gauteng Province area of South Africa, on the 22nd of March 1972. He grew up with both his parents but had to witness his father physically and psychologically abuse his mother until his parents eventually separated.

Because of his childhood experience, Nkosi developed a very high sense of responsibility and diligence as a kid. This made his loved ones and neighbours love and cherish him a lot.

He is jovial and speaks a lot. He is currently 50 years of age.

This iconic movie star is happily married to Charlene Nkosi with whom he shares his quiet life. Nkosi always appears with his wedding ring, exhibiting the characteristics of a dedicated married man.

During some of his interviews, he made it known that his family will always be his top priority. He once had a romantic relationship with Alice Myeza, who birthed him a triplet in 2003. He got married to Charlene some years later and both couples are blessed with a son.

Nkosi started his educational journey, both primary and secondary, in some of the accredited local schools in South Africa. He got his basic education and matric certificate from these schools and further enrolled at Fuda Academy for Dramatic Arts in 1989.

He graduated with a Diploma in Arts which cut across acting, directing, film and television, in 1992. He also attended the Centurion Academic College to further his studies.

Nkosi has over the years proven to be an iconic TV presenter and actor. He started his acting career after completing his studies. In 1994, he landed his debut role in a television Drama series U Bambo Lwami, followed by another role in the Afrikaans rugby drama, Pale Toe. He also had a five-year stint as a presenter on Jam Alley, which got him two Avanti awards as the Best Presenter.

Nkosi appeared in several other dramas including Scandal where he acted in the role of Hector. He also played the role of Moses Shezi in Isono and played Alfred Phakathi in Isibaya from seasons 4 to 5.

Some other roles he played are The Last Hope for the SABC1, a supporting role in Soul City and from 2011 to 2012, he had a recurring role as Norman Sebeka on the M-Net soap opera, The Wild.

After obtaining a five-year contract as a presenter in Jam Alley, in 2007, Nimrod Nkosi co-hosted the Lotto game program, ‘Raise Your Game’ with former Miss South Africa, Vennesa Carreira.

In 2009, the Live Lotto Draw was moved to SABC, he and his co-host moved with the program. He then began hosting the Gospel-themed show John 14 on DStv station Mzansi Magic Music in 2013.

Nkosi never stopped giving his best as he took over as a host of the Mzanzi Magic docu-reality series, ‘Utatakho’ from Zola in 2015. He also showed on the second season of the e.tv game show, I love South Africa as a guest competitor.

Although the exact net worth of Nimrod Nkosi to the public. However, because of his tremendous efforts in South Africa’s entertainment industry, his successful shows and partnerships, his net worth ranges between $100,000 to $300,000.