In this post, I will share with you some interesting things you probably or are yet to know about Robert Peters.

Like, his biography; background, early career, filmography, and awards. Also, I will discuss his current marital status. Thus, you will be able to know whether or not he is married, divorced, in a serious relationship, and or a “single pringle.”

Scroll down a bit. Scroll a bit more and then again for all you seek to know is detailed in this post as always.

Expectedly, Naija Biography is here as always to feed you from her wealth of knowledge, so keep reading.

Robert Peters was born in the early ’70s to the beautiful family of Mr. Lawrence Adagba, and Mrs. Comfort Peters.

Born precisely on 6th June 1973, Robert is of Afemai decades, and a native of Ososo, Akoko Edo local government, Edo State. Edo State is a State in the South West part of Nigeria.

For his elementary education, Robert attended St. Gregory Primary School, Kaduna. He also had his secondary education in a secondary school in Kaduna State.

Later, Robert Peters got admitted into the prestigious University of Jos (UniJos), where he studied, and bagged a Bachelor’s Degree in Geology.

Shortly after his university education, (2004) Robert proceeded to the New York Academy. Therein, he did a course in Visual Storytelling.

Notably, he went for training on Eed Cameras and Equipment with REDucation. Similarly, he did another training with the Film Career Connection in Atlanta. 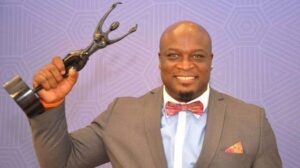 Robert Peters started his acting career when he joined the Nigerian movie industry better-known as Nollywood in 1998.

Notably, Robert was able to secure another movie role after his performance in his first movie role, “Mama Sunday.”

Robert continued doing great in his pace until he was almost known by everyone. He has built a name, a brand, and great achievements for himself.

Since he rose to prominence, Robert Peters has featured in over 150 movies. These among others include;

° Boxing Day: A Day After Christmas

° A Trip To Jamaica

° When One Door Closes

° Affairs of the Heart

Due to his acting prowess; the way he explains movie roles with excellency, Robert Peters has won many hearts, awards, recognitions, and nominations. These among others include;

° Certificate of Achievement at the African Film Festival – 2018

° Excellence and Leadership Awards by the UM Magazine Africa – 2017

° Best Cinematography at the NAFCA Awards – 2010

Over to you! What else do you want to know about Robert Peters? Tell me about it with a comment box…