Olawunmi Toriola is a Nigerian actress, movie producer and entrepreneur from Ogun state. She is popularly called Queen Lateefah, and her stage name is Wunmi Toriola which is derived from her real name. She was first featured in a movie titled “Isese Lagba”, which was produced by Tawa Ajisefeni, the movie brought her to the limelight by making her a household name due to the strength and vigor which she puts into acting. 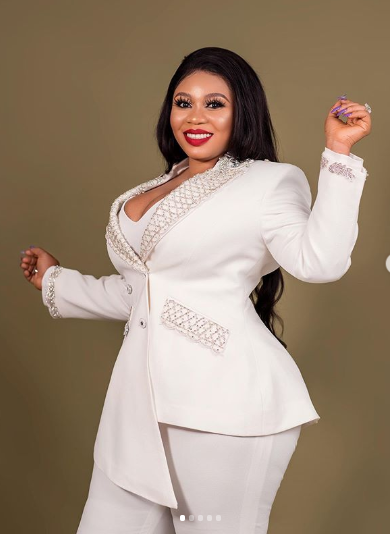 Wunmi Toriola was born to the family of Mr. and Mrs. Toriola on July 11, 1988, in Lagos State, Nigeria. The actress was born into a family of four, she lost her mum at a tender age and she grew up with her father. She went to secondary school in Lagos and she is a native of Ogun State, Nigeria.

Wunmi graduated with a degree in Linguistics at the University of Ilorin and also graduated with a Diploma in Theatre Arts from Odunfa Caucus a Yoruba theatre organization founded by some industry veterans like Yinka Quadri, Taiwo Hassan, among others.

After a few years of learning the ropes of acting, she went from being an actress to becoming a movie producer. And so far, she has produced over 13 movies and featured in more than 100 movies since her acting career began. “Ajewunmi”, which happens to be her first movie produced in 2012, shot her to the limelight.

Wunmi Toriola got married to a US-based man who she met on Facebook on the 13th of May, 2018. Her husband’s name remains unknown to the public, the couple had their first son in December 2019 who is named Zion.

During the pregnancy of their son named Zion, rumours went viral that her marriage had crashed. This started after she deleted every of her husband’s photos on her social media accounts a few weeks after the birth of their son and she debunked the reports as she said it was deliberately deleted.

Another controversy in which she was accused of assaulting her maid and dumping her by the roadside after forcing her to write an undertaking in a police station.

Wunmi Toriola’s maid Motunrayo Azeez says the husband of the actress also called a soldier to beat her up in their home after they accused her of drugging her son.

Some movies she produced are;

She has also featured in movies such as;

In 2018, she won the Fastest Rising Actress (Yoruba) award at the City People Awards.

Wunmi Toriola is a prominent Yoruba actress and movie producer whose career is enjoying a smooth ride. She has an estimated net worth of $350,000.