Back to All Biographies
Influencing Musician

Temilade Openiyi, popularly known as Tems is a fast-rising Nigerian alternate R&B music singer, record producer, and songwriter. Her unique and sensational voice coupled with the inspiring lyrics of her songs has captured the heart of many Nigerians. 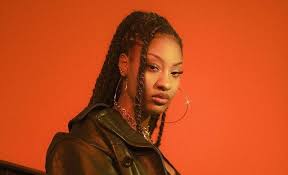 Tems was born on the 11th of June, 1995 to a British-Nigerian father and a Nigerian mother. She had her early years in the UK but had to return to Nigeria at the age of five after her parents called to quit each other. Returning to Nigeria, Tems lived with her mum and brother in Ajah, Lagos State, Nigeria..

She attended Dowen College for her secondary school education, where she was discovered by her music tutor and she had the opportunity of learning the piano and the guitar, after which she traveled to the University of Johannesburg, South Africa to have a degree in Economics.

As a child, she listened to lots of gospel songs, thanks to her mother. However, when she became older, she sought to discover other music genres and this led her to listen to songs by superstars such as Aaliyah, Lil Wayne, Beyoncé, and Destiny Child.

By the time Tems turned fifteen, she had already decided that she wanted to pursue music professionally. To make this dream a reality, she took the first step to stop listening to other artists. She did this to discover her own style. Thus, she began to create music in her own way, and this led to the birth of a style that is a fusion of Alté, Afrobeats, and R&B.

While in the university, she had picked up sound production and began to master the skill. The goal behind learning the skill was to produce beats for her own songs. In 2018, Tems launched her music career officially with the debut song, Rebel, whose beats had been produced by her. Rebel helped introduce her to the Nigerian music scene, and many people noticed that she was a talented Alté artiste.

However, it was her follow-up single, Try Me, that did the magic and won her thousands of fans right away. The song was a huge success on radio, receiving constant airplay on radio stations across the country. Her success on radio led to increased streams on digital music platforms. Try Me was released in August 2019. Already recognized as a unique voice in the industry, Tems received a collaboration invite from American singer Khalid. She honoured the invitation, and it led to the creation of the remix of the single, Know Your Worth. The remix also featured fellow Nigerian singer, Davido.

Yielding to the wishes of her fans, Tems completed work on her debut project and released it on the 25th Of September 2020. The EP titled For Broken Ears, which was produced by Tems, was a commercial success in Nigeria, North America, and Europe. The project’s lead single, Damages, was fans’ favourite and surpassed her success with Try Me. That same year, she collaborated with Wizkid on Essence‘s song, which is the most successful single of his Made In Lagos Album. Thanks to Essence, Tems has become a global music star.

Due to her role in creating the hit single, she earned a number one spot on BBC 1Xtra Airplay Chart, a Billboard Hot 100, a Soul Train Music Award, two NAACP Image Awards, and a Grammy Award nomination for Best Global Music Performance. Her success with Essence paved the way for a collaboration with Canadian-American singer and rapper Drake. She was featured on Fountain, one of Drake‘s Certified Lover Boy album tracks. Fountain helped Tems to earn her second Billboard Hot 100.

Almost a year after the release of her debut project, Tems dropped her sophomore EP titled If Orange Was A Place. The album which contains the commercially successful single, Crazy Tings, was produced by Guilty Beatz and released under RCA Records. She had bagged a recording deal with the publishing company earlier that year.

Tems is regarded as one of Nigeria’s top five female superstars and is ranked among other female leading artists like Tiwa Savage, Yemi Alade, and Simi.

The singer was five years old when her parents divorced and she maintains a close relationship with her mother and brother. When she’s not in the studio making music or performing at gigs, she likes to spend time alone in her apartment or pay a visit to her mother’s place.

Tems initially worked as a Digital Marketer in the corporate sector before quitting to pursue a career in music full-time. The singer cites music acts like Lauryn Hill, Burna Boy, Asa, and Adele to be her source of inspiration in the industry which motivates her to do more as an artist.

She was rumored to be in a relationship with Wizkid, and the singer Tems is single and details of her previous relationships are not known to the public as she has chosen to keep them from the public.

In December 2020, Tems and fellow Nigerian singer Omah Lay were arrested by the Ugandan Authorities for performing live in the country at a show, which flouted the Covid-19 prevention regulations imposed by the government. The duo was remanded in police detention for two days before being released after the interventions of high-powered individuals and the Nigerian embassy in Uganda.

Tems won the Most Alternative Song category for Damages at Net Honour Awards in 2021. At the 2021 African American Entertainment Awards, she won the Best Female Artist category and also went home with Best Collaboration, Best Video, and Song Of The Year for her work with Essence.

The singer and songwriter earn a lot from her music career via brand partnerships, ambassadorial deals, gig performance, and discographies royalties. Tems is estimated to have a net worth of US$1 million.

Tems baby, as she is fondly called has a huge fan base where she connects with her fan and for the love of her alternate style of music.

Tems baby is a voice that resonates well with those who love cool music and alternate sounds, she is posed for higher ground in years to come. Let me hear your thoughts through the comment section.