Tiwatope Savage is a British-Nigerian singer, songwriter, and actress born on February 5, 1980. She was born in Isale Eko and moved to London for secondary school when she was 11 years old. She launched her music career five years later, performing synth sounds for musicians like George Michael and Mary J. Blige. Savage got a publishing agreement with Sony/ATV Music Publishing in 2009 after performing on the UK edition of The X Factor and graduating from Berklee College of Music. Savage returned to Nigeria in 2012, inspired by the developments of the Nigerian industry, and signed with Mavin Records.

On July 3rd, 2013, her debut studio album Once Upon a Time was released. Seven singles, Kele Kele Love, Love Me, Without My Heart, Ife Wa Gbona, Folarin, Olorun Mi, and Eminado, were released to accompany it. At the 2014 Nigeria Entertainment Awards, the album was nominated for Best Album of the Year, as well as Best R&B/Pop Album at The Headies 2014. On December 19, 2015, Savage released his second studio album, R.E.D. “My Darlin” and “Standing Ovation” were two singles from the album. Roc Nation signed Savage to a management and publishing agreement in June 2016. Sugarcane, her debut EP, was released in September 2017. The Nigeria Entertainment Awards have nominated R.E.D and Sugarcane for Best Album.

In November 2018, Savage won Best African Act at the 2018 MTV Europe Music Awards, becoming the first woman to win the category. In May 2019, she announced her record deal with Universal Music Group and exit from Mavin Records. Savage sings in English and Yoruba; her music blend Afrobeats, R&B, pop, and hip-hop. Savage’s contributions to the Nigerian music industry have earned her several achievements. She has been involved in youth empowerment and breast cancer screening projects and has raised funds to build schools in Nigeria. 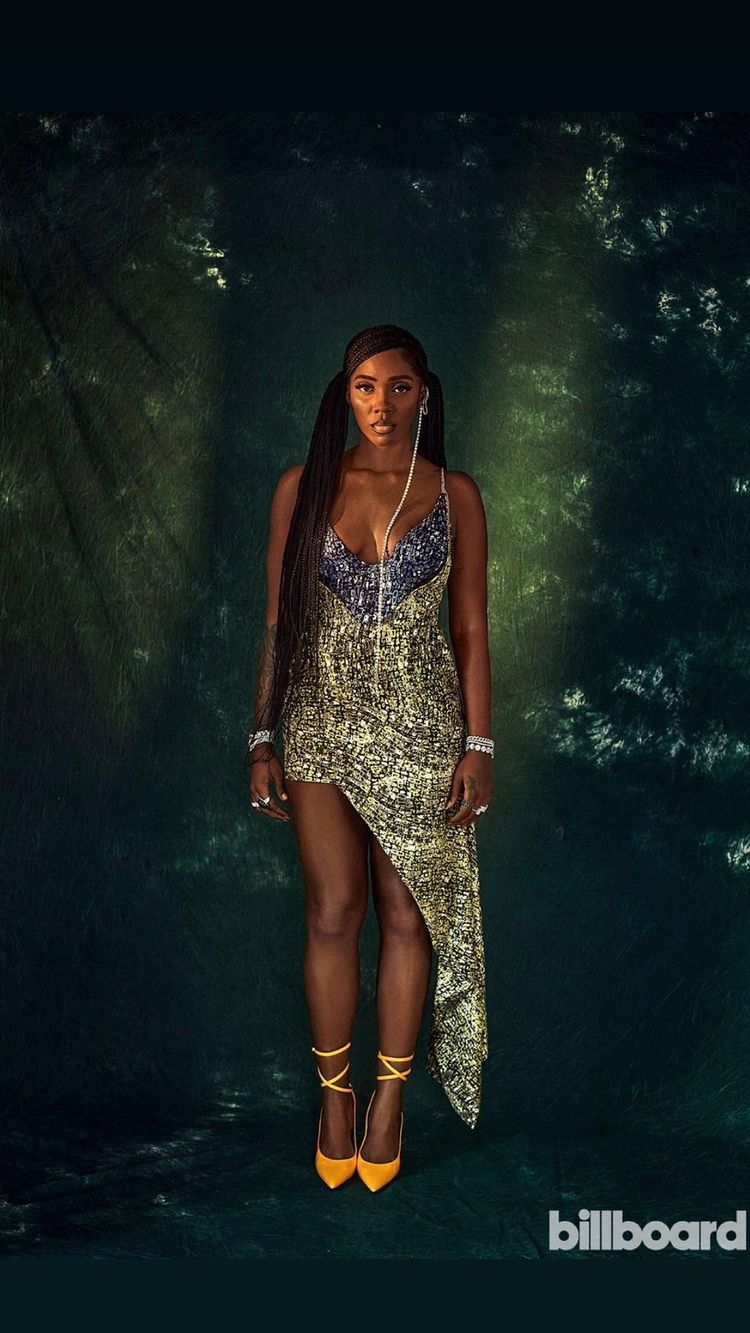 Tiwatope Savage was born on February 5, 1980, in Isale Eko, Lagos State, Nigeria. When she was 11 years old, her family moved to London. She was a trumpet player for her high school’s orchestra band while in secondary school. Savage earned an accounting degree from the University of Kent and went to work for The Royal Bank of Scotland. In 2007, Savage graduated from Berklee College of Music with a degree in professional music.

Savage auditioned for the UK version of The X Factor in 2006 and made it to the final 24, but was the 12th contestant to be eliminated. She struggled with dealing with the spotlight while competing. “She stated, “You must constantly be aware that others are observing you. It was a really terrible period for me when I learned that I wouldn’t make it to the final 12. However, you must learn to hold that till you get home. You don’t want to let everything out at once. People like you and want to see you succeed; they don’t want to watch you fall apart. “

Savage acquired a publishing contract with Sony/ATV Music Publishing in 2009. She was able to write for Babyface, Kat Deluna, Fantasia, Monica, and Mya as part of the arrangement.  In 2010, she received a Grammy nomination for her collaboration with Fantasia on the song “Collard Greens & Cornbread“. Jaicko’s “Oh Yeah,” which features Snoop Dog, and Deluna’s “Push Push,” which features Akon, were both written by Tiwa Savage. On Whitney Houston’s album, I Look to You, she sang background vocals in 2009.

Once upon a time

In 2010, Tiwa Savage began work on her debut studio album, Once Upon a Time. Tiwa returned to Nigeria in 2012, inspired by the growth of the Nigerian music industry, and signed with Mavin Records.

She signed with Mavin Records in 2012 and was featured on the label’s compilation album Solar Plexus as one of the lead artists. In 2012, Savage was included in a remix of “Oyi.” She produced her own version of the song before teaming with Flavour.

In May 2013, she hosted an album listening party at the Wheatbaker Hotel in Ikoyi. She presented the whole tracklist of the album and confirmed Iceberg Slim, Sarkodie, and General Pype as featured performers during the listening party. The album was released to the Nigerian public on July 3, 2013. It was available on iTunes a day before it was released in stores. Savage chose the title Once Upon a Time to reflect the pleasant aspects of her life. She stated that she wants to inspire other aspiring musicians by informing them that she was once a little girl from Isale Eko who aspired to be a star. At the 2014 Nigeria Entertainment Awards, Once Upon a Time was nominated for Best Album of the Year.  It was also nominated for The Headies 2014 for Best R&B/Pop Album.

Singles in the Album “Once Upon a Time”

In honor of Valentine’s Day, Tiwa Savage released the Spellz-produced “Love in Yellow” on January 31, 2014. The song has a classic Rhythm and funk feel to it. Don Jazzy produced Reekado Bank’s 2014 track “Turn It Up,” which featured Savage. Mavin Records released “Dorobucci,” a song produced by Don Jazzy and featuring performances by Savage, Don Jazzy, Dr. SID, D’Prince, Reekado Banks, Korede Bello, and Di’Ja, on May 1, 2014. Savage performed with Miguel, Flavour N’abania, Davido, Mafikizolo, Uhuru, Oskido, and others at the 2014 MTV Africa Music Awards on June 7, 2014.

In June 2014, She collaborated on “Africa Rising,” a song for DStv’s campaign featuring Mi Casa, Lola Rae, Sarkodie, Diamond Platnumz, and Davido. The goal of the campaign was to encourage Africans to participate in community-based social investment initiatives. Callback Dreams, a South African production firm, filmed and directed the music video for “Africa Rising.” The song was performed at the Africa Rising launch ceremony in Mauritius by the musicians.

Wizkid and P-Square provide guest vocals on the deluxe edition, released in February 2016. At the 2016 Nigeria Entertainment Awards, R.E.D was nominated for Best Album. Savage recorded the album while expecting her first child. On December 21, 2015, MTN Music made the album accessible for free digital streaming. It became the most-streamed album on Spotify within 24 hours of its release.

Tiwa Savage performed a show at The O2’s Indigo arena on August 24, 2018. Tickets for entry sold out hours before the event. Don Jazzy, Reekado Banks, Di’Ja, Dr. SID, Awilo Longomba, Mystro, and the Alternate Sound Band also performed during the show. Savage staged a pop-up shop on Berwick Street prior to the show.   She won Best African Act at the 2018 MTV Europe Music Awards in November, becoming the first woman to do so.

On December 2, 2018, Savage performed at the FNB Stadium in Johannesburg, South Africa, as part of the 2018 Global Citizen Festival: Mandela 100. Savage was added to the list of performers performing at the 2019 Wireless Festival on March 13th.  On May 2, 2019, Universal Music Group revealed Savage had signed a seven-year publishing and distribution contract with the company.   She also stated that she had left Mavin Records.

Tiwa Savage’s debut song with Motown Records, “49-99,” was released on September 5, 2019. The lyric “49 sittings, 99 standing” from Fela Anikulapo Kuti’s 1978 hit “Suffering and Smiling” is referenced in the song. “49-99” has rhythmic percussion, humming background harmonies, and sharp snares, and is described as a mix of Afrobeat, R&B, and pop music.  The video for “49-99,” filmed by Meji Alabi, is full of vibrant images and symbolism. One of the video’s sequences is based on photographer Eliot Elisofon’s classic photos of Congolese schoolgirls from 1972.  Another scene, in which Savage is styled with long braids, is evocative of Diana Ross’ late 1960s flower-accented hairstyle.

On November 19, 2019, Savage released “Attention,” a single produced by Black Jheerze, and “Owo Mi Da,” a song produced by Pheelz. In “Attention,” she chastises her love interest for not paying attention to their relationship, while in “Owo Mi Da,” she makes scathing statements about an anonymous borrower. “Ekó,” a slow-burning ballad from Coldplay’s eighth studio album Everyday Life, featured Savage on background vocals (2019). Tiwa Savage published the tracklist for her next album, Celia, on August 18, 2020, and confirmed that the album will be released on August 28, 2020.

Tunji Balogun got married to Tiwa Savage in a traditional ceremony at the Ark in Lekki on November 23, 2013. On April 26, 2014, the pair married in a white ceremony at the Armani Hotel in Dubai. Savage and Balogun revealed they were expecting their first child together on January 1, 2015.

Savage gave birth to their baby six months later. Balogun accused his wife of adultery and his mother-in-law of witchcraft on April 28, 2016. She later refuted her husband’s claims of adultery, accusing him of financial irresponsibility, drug addiction, and abandonment. She stated that she and Tunji were no longer married.

On July 19, 2021, Tiwa’s father died after a long battle with an unidentified disease.

Savage revealed in an interview on October 8, 2021, that someone was attempting to extort and blackmail her with a leaked sex tape of her and her boyfriend; later, on October 19, 2021, the contents of the sex tape were revealed to be vaginal intercourse with Savage being a party to it and the male partner’s identity unknown.

The sex tape issue has elicited mixed reactions, with some fans claiming that the leaked footage was merely a marketing gimmick. While the majority of fans and public figures have reacted negatively to Savage’s sex video incident, other celebrities, like Mercy Aigbe, Harrysong, and others, have resorted to social media to express their support for her.

She later proceeded to Instagram to post a cryptic message that said, “Change that sh*t to the game and never talk about it again,” implying that supporters should disregard what they had seen.

In Nigeria, Tiwa Savage has been active in a number of youth empowerment and breast cancer screening programs.  She aided in the fundraising for a local organization that constructs schools.

Savage signed a management and publishing deal with Roc Nation in June 2016, according to rumors in the media.  She made it official on July 29, 2016, when she announced the deal on her Instagram account, making her the first Nigerian artist to be signed to the company.

Tiwa Savage is a very popular music artist with an international fan base. She has over 15 million followers on Instagram and 5.2 million on Twitter. Her social handles are listed below.