10 Fact You Need To Know About Dagrin

If we are talking about a legend in the Nigerian music Industry then Dagrin must be Number one or two, DaGrin broke the door down and created a worthy blueprint that rappers like Olamide, Reminisce, and to an extent, Phyno and Classiq could follow.

Dagrin also nicked named, Barack O’Grin died April 22, 2010, in a ghastly motor accident in the early hours of April 14, 2010, after his car collided with a stationary trailer in front of Alakara Police Station, off Agege motor road, Mushin, Lagos; claimed his life. He was later pronounced dead in the intensive care unit of Lagos University Teaching Hospital after several efforts to save his life. Below is 10 fact you need to know about Dagrin 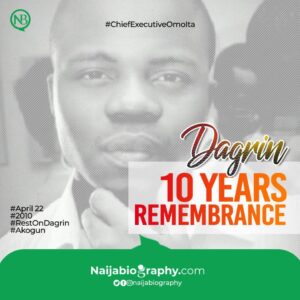 10 Fact You Need To Know About Dagrin

That is the 10 fact you need to know About Dagrin, I believe you found out New things about the Legend artist