Jane Awindor (born April 10, 1987) popular known by her stage name Efya, Alias Miss Jane, is a Ghanaian singer, songwriter, vocalist, performer, and actress. She is the daughter of a popular filmmaker and celebrity host of the late television show Greetings From Abroad, Nana Adwoa Awindor. Efya came into the limelight after featuring in the maiden edition of the Stars of the Future talent show. Since 2011, She has won the Best Female Vocal Performance category at the Ghana Music Awards in four sequences.

On May 8, 2016, Efya was announced as one of the newly signed acts to Wizkid’s Starboy Entertainment. The statement came after Wizkid’s performance at the Ghana Music Awards, However, in an interview with her, she said, Starboy did not sign her, According to her, it is more of an affiliation of the record labels of the four musicians and nothing more. In March 2021, she was among the Top 30 Most Influential Women in Music by the 3Music Awards Women’s Brunch. 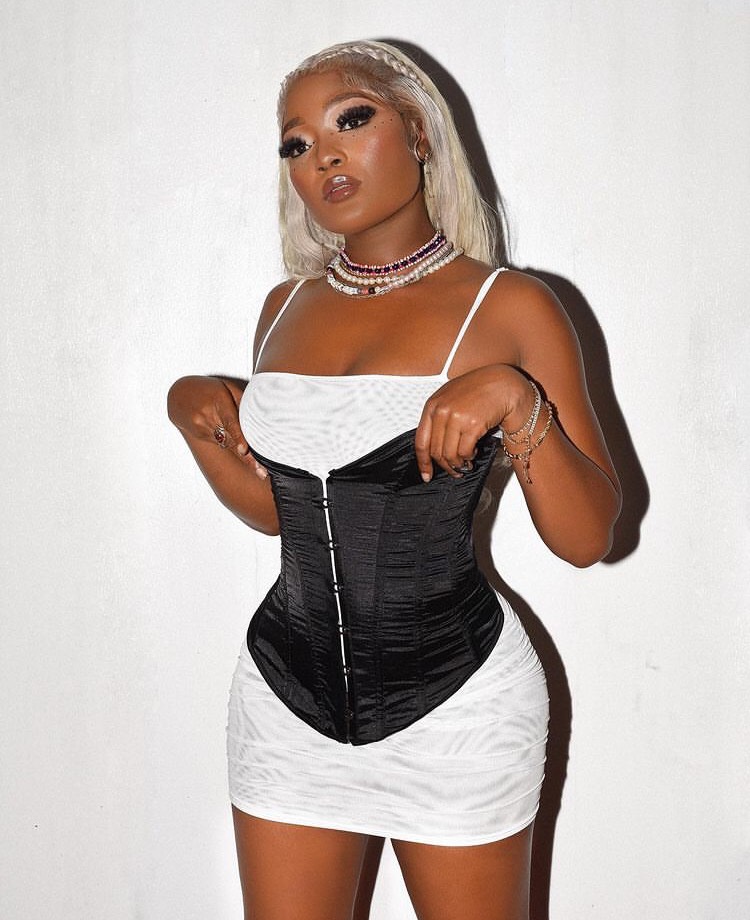 Efya was born and raised in the family of Awindor in Kumasi, Ashanti Region, Ghana. She has three siblings, a sister, and two brothers. Efya had secondary education from Yaa Asantewaa Girls’ Senior High School (YAGSHS), a public high school for girls in Tanoso, Kumasi. She was very young when she first realized she had musical talent. While still a child, she began receiving voice training from family members, which aided her in becoming a successful musician. as the family has a musical and theatre background.

Her mother enrolled her in a filming school in Accra and she was given admission. She relocated to Accra, Ghana to study film at the NAFTI film school (NAFTI). She attended the University of Ghana where she graduated with a degree in theatre and music. In 2008, she participated in Charterhouse’s Stars of The Future television show where she lost to Irene Logan and won the first runner-up and Secured herself a three-year recording contract. She earned national endorsement throughout Ghana.

The recording contract gave her the opportunity to collaborate with irene on an album titled Unveiled, which was released in South Africa in 2009. After three years, Efya completed her deal with Charterhouse and Started recording music on her own and performing at local bars and places. When she decided to go solo, she changed her name from Miss Jane to Efya (became popular now). In an interview, she said, “When I decided to go solo, it made sense at the time to reinvent myself in every way, I wanted a name that was African and unique but at the same time relevant to me in some way. My manager, Jimmi, helped me come up with the name Efya”.

In 2011, she signed a recording deal with One Nation Entertainment.

The Mixtape features artists including Black Magic. In an interview,  Efya said love is the overall theme of the mixtape and that the record is about the good, the bad, the ugly, the heartbreak, the pains, and the highs and lows of life.

Efya was starring in a Ghanaian Nigerian romantic blue comedy film in 2012 “Single and Married” produced by Yvonne Nelson and directed by Pascal Amanfo.

Efya announced the release of her studio album Janesis set to be in the third quarter of 2013 but, the release timeframe was postponed and was later released on April 22, 2016. The album’s lead single Forgetting Me was released on January 2014 and it was well received by people. A writer for Modern Ghana defined the song as a “powerful ballad that tells the story of love and heartbreak”.

On 16th July 2014, she released the second single off the album, titled “One of Your Own” featuring Bisa Kdei. She released  “Gingam Too Much” on December 2014 produced by Kaywa. She shot the music video for “Forgetting Me” and was directed by Prince Dovlo of Seven Streets Entertainment

On December 23, 2016, Nigerian artist Wizkid released a solo single “Daddy Yo”, with unaccredited vocals by Efya Although she appeared in the music video. Efya released the reggae-infused track “Until the Dawn” in 2017. It was produced by British-born Nigerian record producer and recording artist Maleek Berry.

In an interview, Efya described her sound as “Afro-soul” with a hint of pop. She said that her sound fluctuates depending on how she feels and who she’s working with. In another interview, Efya said she was into old-school jazz and highlife growing up, she mentioned Kojo Antwi, Aretha Franklin, and The Temptations as her key musical influences

Efya does not stop her career as a musician only, In December 2019, She announced the launch of her new clothing line called “The Native Chic“.

She was named alongside Becca and others as the 2021 Top 30 Most Influential Women in Music by the 3Music Awards Women’s Brunch.

Efya performed in Dome in Accra at the 2011 MTN Ghana Music Awards. In April 2013, She performed at the Radio and Television Personality Awards, alongside other popular Ghanaian musicians including Asem,  Kojo Antwi, Ruff & Smooth, No Tribe, Stonebwoy, and D3. Efya performed at the Carnivore Restaurant in Nairobi, Kenya; the event was organized by Capital 98.4 FM and sponsored by Tusker Brewery.

Efya performed on March 5, 2013, at the Hope City Launch Celebration Concert, which included American recording artist Chris Brown as the headlining act, along with Samini, D-Black, Sherifa Gunu, and R2Bees.

She appeared on stage at the Marcus Garvey Park concert in the 2013 African Day Parade on September 22.

Efya performed at the annual Girl Talk event, which had Becca as the headlining act, and was held at the National Theatre in Accra on December 20, 2013.

Efya is one of the official ambassadors for the non-profit organization Awal Children of the Future Foundation (ACOTF), a foundation founded by Posigee, a Tema-based record producer recognized for singles such as “Sister“, “Injection” and “Issues“. their goal is to help victims of physical and emotional trauma, particularly orphans and street kids. The foundation consists of many musical ambassadors such as Sarkodie, Yaw Siki, and Ruff n Smooth. The NGO released its theme song “This is Who I Am” in 2012; written by Chase and produced by Posigee.

Efya had at least 1 relationship previously, and she has not been engaged, However, Efya is not in a relationship with anyone. Efya kept her personal life and love life very private.

Efya has become the most influential and richest musician and actress in Ghana. Her net worth was estimated between $1 million – 5 million while her primary income source is from Soul Singer.