The full name of Seun Kuti is Oluseun Anikulapo Kuti. He is a famous Nigerian Afrobeat singer. He is the last child of Fela Kuti, a pioneer of Afrobeat music. Seun presently leads his father’s former band named Egypt 80. 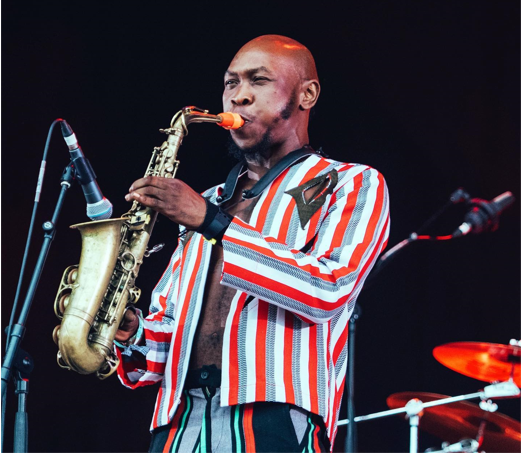 Seun Kuti was born on the 11th of January, 1983, in Lagos State, into the family of the Afrobeat legend, Fela Anikulapo Kuti. At the age of five, Seun developed a passion for music, and by the time he was nine years old, he had begun performing with his father’s band, Egypt 80.

After Fela Kuti passed out in 1997, Seun Kuti assumed leadership of Egypt 80. The group issued an album titled Many Things in 2008. Sean Kuti & Egypt 80’s debut album was made available under that label.

Seun Kuti received an honorable invitation to the Industry Nite in 2014 when he made his debut live performance. On Jidenna‘s second album, 85 to Africa, released in 2019, Kuti made an appearance as a featured guest. In June, Kuti was interviewed about pan-Africanism, his own country, and music for the Polaris series in the Visual Collaborative internet catalog.

On December 16, 2013, Seun and his wife Yetunde George Ademiluyi gave birth to a girl, whom they named Ifafunmike Adara Anikulapo-Kuti.

In the Occupy Nigeria protests over President Goodluck Jonathan’s reduction of fuel subsidies in Nigeria, Kuti took an active role.

According to different sources online, Seun Kuti is one of the richest Afrobeat musicians. His net worth is estimated to be around $2 million.