Cyriel Kolawole Dessers (born December 8, 1994) is a professional footballer of Nigerian descent, who plays as a forward for Serie A club Cremonese. He also plays for the Nigerian national team, Super Eagles. 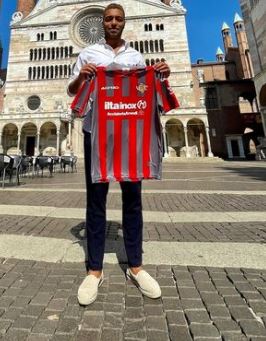 Cyriel Dessers was born on the 8th of December, 1994, in Tongeren, Belgium, to a Belgium father and a Nigerian mother.

Cyriel Dessers started his football career in OH Leuven. Dessers and Lokeren agreed to a two-year contract in April 2014.

He signed a deal with NAC Breda of the Dutch Eerste divisie in July 2016 that ran through the summer of 2019.

They were elevated to the Eredivisie on May 28, 2017, following a 1-4 victory over NEC, in which Dessers scored three goals. He scored 29 goals in 40 games for the season’s total.

Dessers joined FC Utrecht in July 2017 after reaching an agreement on a three-year contract with an additional year’s option. On August 11, 2017, he scored the opening goal of the match.

He went to Genk on a four-year contract on June 30, 2020. Dessers returned to the Netherlands on August 31, 2021, and joined Feyenoord on a loan with a purchase option. On September 19, he scored Feyenoord’s fourth goal in a 4-0 victory over PSV, his first goal for the team.

Feyenoord declared on June 1, 2022 that they had decided not to exercise the option to buy Dressers’ contract. Dessers joined with Cremonese in Italy on August 10, 2022.

In December 2019, Dessers made the decision to represent Nigeria internationally. He was included in the team members invited by Nigeria head coach Gernot Rohr for the Africa Cup of Nations qualifying matches against Sierra Leone on March 4, 2020. On October 13, 2020, Dessers made his international debut in a friendly 1-1 tie with Tunisia.

According to different sources online, Cyriel Dessers has an estimated net worth of $2 million.