Femi Kuti is a well-known stage name for Olufela Olufemi Anikulapo Kuti, a Nigerian artist who is the oldest child of Fela Kuti, the father of Afrobeat, and the grandchild of Funmilayo Ransome-Kuti, a political activist, women’s rights advocate, and traditional patrician. Femi Kuti started out as a member of his father’s band, Egypt 80. Femi formed his own band, Positive Force, in 1986 to forge a career for himself as a musician separate from his father’s legacy. 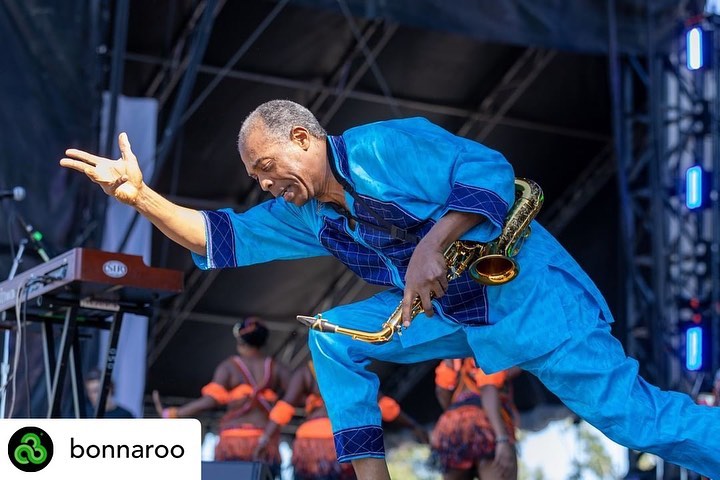 Femi Anikulapo-Kuti was raised in the old capital of Nigeria, Lagos State, and was born on June 16, 1962, in London to Fela and Remilekun (Remi) Ransome-Kuti (née Taylor; 1941–2000). Soon after taking Femi to live with her, his mother abandoned his father. Femi made the decision to live with his father, nonetheless, in 1977. At the age of 15, Femi began studying the saxophone and eventually joined his father’s band. He attended Baptist Academy for his primary education and then proceeded to Igbobi College for his secondary education.

Femi has devoted his career to social and political causes, just like his father. Femi’s grandmother, Funmilayo Ransome-Kuti was a political activist and women’s rights advocate. Femi believes that his mother, Remilekun Taylor, has had the most impact on his life, despite the fact that he is the son of an international legend. In the late 1980s, he formed Positive Force alongside Dele Sosimi (Gbedu Resurrection), a former Fela Anikulapo Kuti keyboardist. His international career began in 1988 when he accepted invitations to perform at the Festival d’Angoulême (France), the New Morning Club in Paris, and the Moers Festival in Germany from the French Cultural Centre in Lagos and Christian Mousset.

On his album, Fight to Win (2001), Femi worked with several US musicians, including Common, Mos Def, and Jaguar Wright. Another contribution Femi made to Red Hot & Riot, a compilation CD honouring Fela Kuti that was issued by the Red Hot Organisation and MCA, was a version of his father’s timeless song “Water No Get Enemy.” All CD sales revenues from Femi’s song, which was produced in collaboration with hip-hop and R&B musicians D’Angelo, Macy Gray, The Soultronics, Nile Rodgers, and Roy Hargrove, were given to organisations combating AIDS.

Femi Kuti’s voice can be heard in Grand Theft Auto IV, a videogame, where he serves as the host of radio station IF 99. (International Funk 99, described as “playing a great selection of classics from West Africa, the US, and elsewhere”). Like his father, Kuti has come under fire for his criticism of his native Nigeria, particularly in the songs “Sorry Sorry,” “What Will Tomorrow Bring,” and “97“.

A management agreement was made between Chocolate City Music Group and Femi Kuti on December 19, 2014. Both Audu Maikori’s social media pages and the official Chocolate City Instagram account of the record label shared the news. Femi Kuti and his son Made Kuti launched their two-album project, Legacy+, on February 5, 2021, via Partisan Records. Stop the Hate, Femi’s eleventh album, and For(e)ward, Made’s first album, are both included in the collection.

The son of Fela Kuti, an Afrobeat musician and political activist, Femi carried on his father’s passion for both music and politics. When he was 16 years old, he joined his father’s band and learned to play the saxophone and piano. After his father passed away, he took centre stage and began writing and performing. Femi continues to be politically motivated while grooving to upbeat funk, jazz, and traditional African music that is fueled by lyrics against government corruption, poverty, and the substandard living conditions that the majority of Nigeria’s citizens endure.

In his album Africa for Africa, Femi Kuti stressed the issue of “bad government” in Africa. He informed the populace prior to the 2011 Nigerian elections that there was “no difference between the three contenders running for the presidency in Nigeria.” He added, “We could say we’re moving in the democratic process.” And it’s probably better than going to war, but corruption is still very rampant. The people are hungry and sick. And the government controls the media, so it can’t be critical. “

Kuti further stated, “It’s a very hypocritical situation. People settle for putting a meal on the table, but they don’t know that the rest of the world doesn’t suffer every day from power outages and water shortages. Nigerians don’t even know about the history of African slavery, because it’s not included in the textbooks. ” Through his management company, Chocolate City, he released a remix of the song “Politics Na Big Business” with Tuface Idibia and Sound Sultan after the 2015 elections, echoing the same views.

In his song “Make We Remember,” Kuti exhorts listeners to never forget the words of his father and other “great black people” who struggled for Africa’s liberation. Femi has been using music to uplift, inspire, and empower Africans for a very long time.

Ayomide Kuti and Made Anikulapo Kuti are two of Femi Kuti’s sons (born in 1997). The latter resulted from his marriage to his ex-wife, Funke Kuti.

His net worth is currently unknown, but he has done well for himself over the years, but still lives a moderate life.