Francisca Ordega (born October 19, 1993) is a professional female footballer from Nigeria who plays as a forward for CSKA Moscow in the Russian Women’s Football Championship. She also plays for the Nigeria women’s national football team, Super Falcons. She was once nominated for best female African footballer. 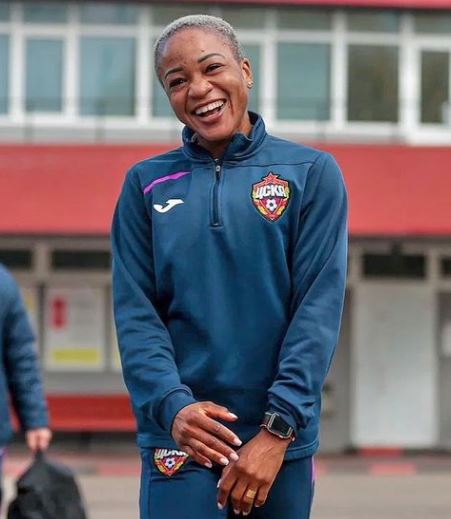 Francisca Ordega was born on the 19th of October, 1993, in Gboko, Benue State, which falls among the states in the Northern part of Nigeria.

Before getting promoted to the professional side in 2008 and competing in the Nigerian Women’s Championship, Ordega started her career playing for Bayelsa Queens at the youth level.

Francisca Ordega joined Rivers Angels in 2011, one of the elite teams in the Nigerian Women’s Championship. She relocated from Nigeria to Russia in 2012 to play for Rossiyanka in the Russian Women’s Football Championship. Ordega and Rossiyanka announced their mutual separation in November 2012.

Francisca Ordega signed a contract with Pite IF in the Swedish Damallsvenskan in 2013. On May 26, 2013, she scored her maiden goal in a tie-breaking attempt against Vittsjö GIK. She played in 34 games and scored 4 goals for Sweden between 2013 and 2015.

Ordega and Levante UD agreed to a contract that would last until 2023 in April 2021 in an effort to support Levante UD’s bid to become the first team in the club’s history to play in the Champions League. In a 3-2 victory over Madrid CFF on May 22, 2021, Ordega made her professional debut. She entered the game as a substitute in the 67th minute.

On June 8, 2015, in Winnipeg, Manitoba, Canada, she made her World Cup debut by scoring Nigeria’s equalizing goal against Sweden. In the opening encounter of Group D, the thrilling contest ended 3-3. She also participated in Nigeria’s victorious teams at the African Women’s Championship in 2010 and 2014.

She also played on the Nigerian team that won the 2018 Africa Women Cup of Nations in Ghana. During the competition, she scored twice, provided two assists, and was named player of the match during the team’s match against South Africa. She was a member of the Super Falcons team that made history by being the first African side to win the 2021 Turkish Women’s Cup in Antalya, Turkey in February.

Francisca Ordega is one of the richest female footballers in Nigeria. According to the analysis made from different sources online, she has an estimated net worth of $2 million.