In this post, I will share Augustine Azuka Okocha’s biography, early childhood, career, personal life, net worth, and some other interesting things you probably didn’t know about him. Let’s start with his early life and education.

Who is Jay-Jay Okocha?

The Nigerian professional football player, widely known for always representing Nigeria, Jay-Jay Okocha was born on the 14th of August 1973 in Enugu State.

Although he was born and raised in Enugu State, a state in the South-Eastern part of Nigeria, Jay-Jay’s parents are from Ogwashi-Uku, Delta State.

Notably, he got his nickname ‘Jay-Jay’ from his brother, James, who is also a footballer known as Jay Jay. Moreover, Jay-Jay Okocha has another elders brother who was a footballer at the time. Emmanuel is his name while Emma-Jay Jay is his nickname.

Unlike Jay-Jay’s brothers, the name ‘Jay-Jay’ became a name he is widely known for, and the name he identifies with. What’s more, Augustine Azuka Okocha has a nephew, Alex Iwobi who is also a footballer. He plays for Nigeria and Arsenal.

Azuka Okocha has achieved so much for himself in the industry. A popular and a household name, Jay-Jay Okocha started his career in the industry as far back as the early ’90s when he played for Borussia Neunkirchen (1990–1992).

Before he started playing for Borussia Neunkirchen, Jay-Jay Okocha played football with his mates at a young age. Some boys played with anything that was round in the neighborhood at the time.

With this, Augustine Azuka Okocha was discovered in 1990 when he first joined Rangers International Football Club, otherwise known as Enugu Ranger.

This became the turning point of his career as he broke the record at the time. Now, he is known for all his notable achievements and services to the country.

Since he started a career in the sports industry as a football player and especially an attacking midfielder, Jay-Jay has been honored on many occasions. These are some of his honors among others:

African Footballer of the Year runner-up, 1998

Net Worth of Jay-Jay

Altogether, Augustine Azuka Okocha’s net worth is estimated to be $15 million. As you may have imagined, he earns his net worth from his in the sports industry as a footballer.

Over to you, what else do you want to know about Jay-Jay Okocha? Tell me about it with a comment box. 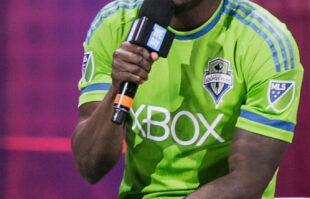 Obafemi Martins Early Life The celebrated Nigerian football player was born in the early ’80s to the family of Mr.…