Michael Olunga Ogada (born 26 March 1994) is a professional footballer hailed from Kenya, he plays a striker position for Qatari club Al-Duhail and the Kenya national team. 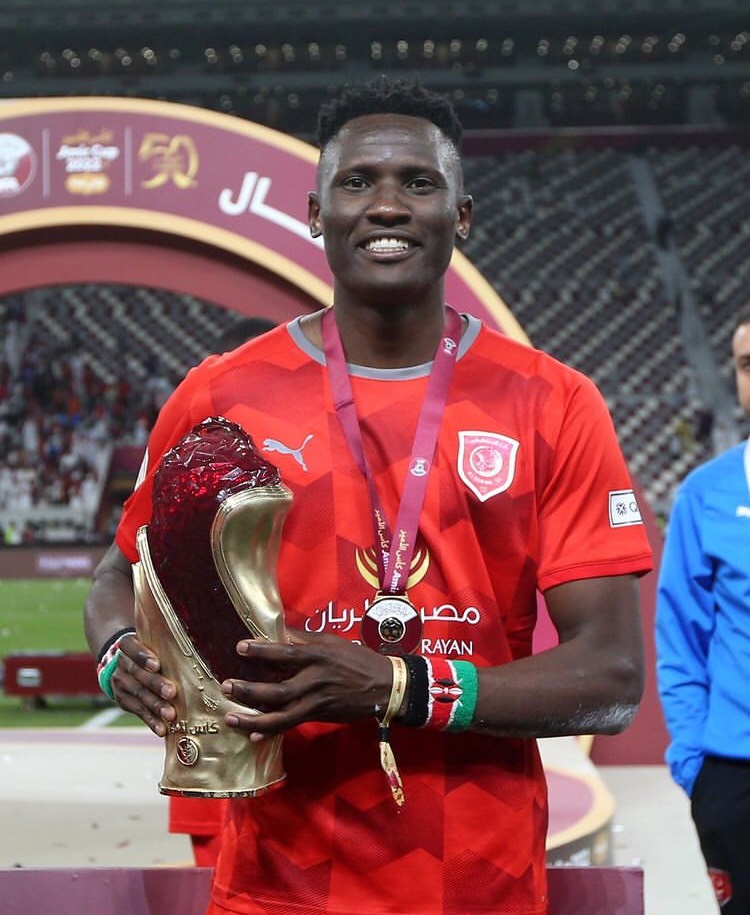 Michael Olunga was born on the 26th of March 1994, in Lakisama, Nairobi, into the family of Mr. Joseph Ogada Olunga and Mrs. Alice Ogada, but lost his father at the early age of 7.

He started to love playing football at the age of 8 with other kids in the street barefoot, and they suffered injuries at times.

Michael attended Baba Dogo Primary School before proceeding to Upper Hill Secondary School. He further to the Technical University of Kenya (TUK) to earn a degree in Geospatial Engineering.

Michael began his football career at Liberty Sports Academy in the Nairobi County League. He helped the team to be unbeaten by scoring 32 goals for the 2012 season, which led to promotion to the Nairobi Provincial League. He was the talk of the town when he scored seven goals in a single match, which helped his team to an 8-0 win.

There was a report earlier that he would be attending trials in France, Liberty loaned him on a one-year deal to Tusker in the Kenyan Premier League on December 19, 2012.

Michael finished the 2013 season with two goals for Tusker. He was loaned to Thika United for a year in the same league, he joined Gor Mahia before the beginning of the 2015 season.

He was the top scorer of the club in the season with 19 goals, which crowned the team’s 15th league title without losing a single match.

On February 17, 2016, Michael signed a four-year contract with Swedish club Djurgårdens IF, he joined the team’s pre-season training camp on trial and scored his first two goals for Djurgården on August 8, 2016, in a winning match against IFK Göteborg. He was crowned man of the match, and coach Mark Dempsey praised him for his excellent performance. Michael also scored in a draw match 2-2 with IF Elfsborg at the Tele2 Arena.

Michael scored the winning goal against Gefle IF in the 86th minute, on August 27, 2016. He also scored 12 goals in the last 12 games of the Allsvenskan, which gave him fifth place in the Allsvenskan top scorer table. He was nominated for Newcomer of the Year in Swedish football, but Alexander Isak later won the award.

He joined the Chinese club, Guizhou Zhicheng, in 2017. On September 1, 2017, Michael was loaned to Girona FC in La Liga for one year. He scored a hat-trick in 22 minutes against Las Palmas on January 13, 2018, and they later won the match 6-0. The success of the match made him the first Kenyan player and the first Girona player to score a hat-trick in La Liga.

Michael joined another team on August 10, 2018, which is a club based in Japanese Kashiwa Reysol. He made history by scoring eight goals for Kashiwa in a winning match of 13-1 against Kyoto Sanga, on 24 November 2019.

Michael ended the season with 27 goals, and Kashiwa were the champions of J2 season, and they were also promoted to the first division. He scored another hat-trick against Vegalta Sendai in J1 League on July 26, 2020, and the match ended in a 5-1 victory. Michael was also the highest goal scorer with 28 goals in the 2020 Japanese J1 League, he won the Golden boot and the J-League 2020 MVP. He became the first African player to win the J-league MVP award.

In January 2021, he moved to Qatar Stars League champions Al-Duhail for a fee of €6 million, and the contract was for three seasons.

Michael’s first appearance for the club was on January 12, in a 3–1 away loss against Al Sadd. On January 25, 2021, he scored a hat-trick in a winning match, 6–0 against Al Ahli in the Emir of Qatar Cup. He scored another hat-trick three months later, in a 4–3 win against Iranian club Esteghlal in the AFC Champions League. Michael finished as the top scorer of the tournament, but Al-Duhail was out of the competition after a 1–1 draw with Al Ahli Saudi in late April.

Michael is not yet married but he was in a relationship with Grace, he introduced her to the public in December 2016 when she was celebrating her birthday.

Michael is one of the richest footballers in Kenya with an estimated $3.6 million.

Early Life Zaidu Sanusi was born on the 13th of June, 1997, in Jega, Kebbi State, which falls in the…

Early Life Shehu Abdullahi was born in Sokoto, Nigeria on the 12th of March, 1993. He was born and raised…