Back to All Biographies
Athlete Influencing

Blessing Oghnewresem Okagbare-Otegheri is a former Nigerian track and field athlete who excelled in the long jump and sprints. In the long jump, she has won medals at the Olympic and World Championships; in the 200 metres, she has won a gold medal. With a time of 10.85 seconds, she also holds the Commonwealth Games record for the quickest women’s 100-meter time. She was given an 11-year suspension for breaking several World Athletics anti-doping rules. Her prohibition ends on July 30, 2032. 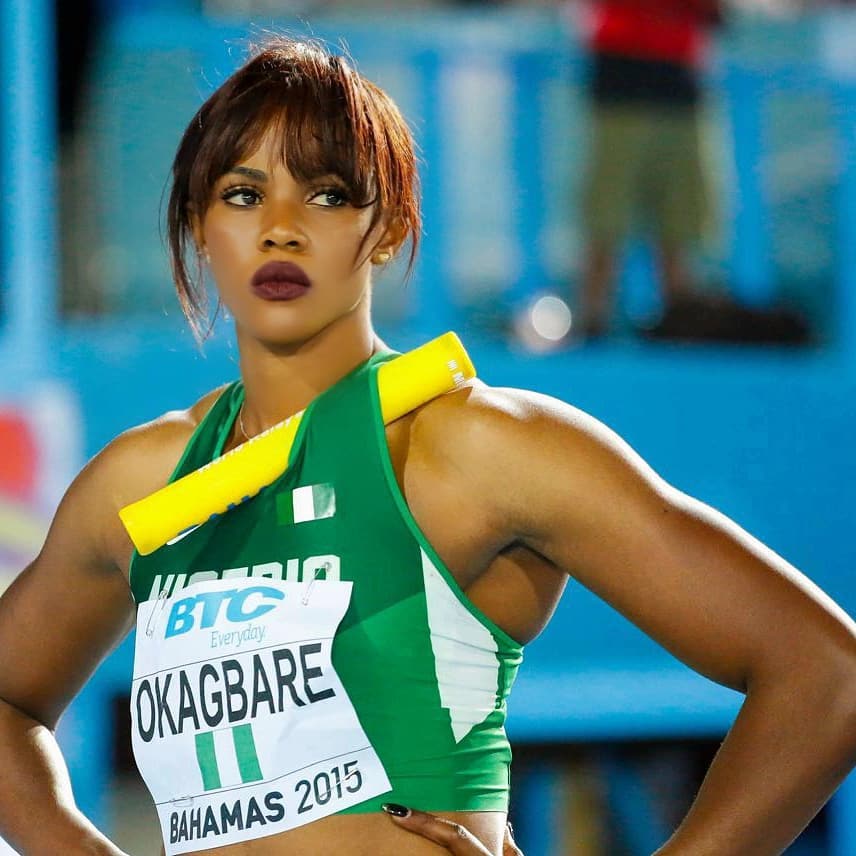 Blessing Okagbare was born on October 9, 1988, in Delta State, Nigeria to Mr and Mrs Okagbare. She was raised by her father, a wholesale businessman in Benin City, Edo State after her parents divorced when she was still a small child. She lost her mother in 2005. Blessing is the last child of her mother, who had three children. Nevertheless, she grew up in a polygamous household because her father had two marriages and 11 kids.

Blessing Okagbare attended Zik Grammar School in Sapele, Delta State, for her secondary education after completing her basic education in Delta State. Blessing Okagbare was about to complete her Ordinary National Diploma programme in the Polytechnic when she received a scholarship to attend an American university.

Okagbare’s teachers and family encouraged her to pursue a career in sports due to her athletic physique. Despite the fact that she participated in football as a high school student, she started to become interested in track and field in 2004. Early on, she competed in a variety of sports, winning medals in the long jump, triple jump, and high jump competitions at the Nigerian school championships. She won the bronze medal in the triple jump for the senior national team at the 2004 Nigerian National Sports Festival. At the 2006 World Junior Championships in Athletics, Okagbare made her debut on the global stage by competing in the qualifying rounds of the long jump and triple jump events.

Okagbare competed in her second Olympic Games in London in 2012. She had completed a number of quick 100-meter races prior to the Olympics, so there was a lot of excitement and expectation for a medal. However, Okagbare’s performance at the 2012 Olympics did not fare as well as it did in 2008. She ran a new personal best of 10.92 seconds in the 100-meter semi-final, but her 11.01-second effort in the final earned her eighth place.

In what would turn out to be a transformative year for Blessing, she established a personal best in the 200 m in April 2013 at Walnut, California, with a time of 22.31 seconds. She later improved her long jump personal best in July with two jumps of 6.98 metres at the Lausanne Athletissima event and 7.00 metres at the Monaco Herculis meet. At the London Anniversary Games on July 27, 2013, Okagbare ran a 100-meter race in 10.86 seconds, breaking the previous African record. She defeated the current 100 m Olympic gold medalist Shelly-Ann Fraser-Pryce to win the final approximately an hour later, setting a new African record of 10.79. Okagbare’s record surpassed compatriot Glory Alozie’s 10.90-second mark, which had stood since 1998.

In the long jump, Okagbare took home the silver medal at the 2013 World Championships in Moscow. She finished just two centimetres behind American Brittney Reese in second place with a jump of 6.99 metres. She finished sixth in the 100 m final with a time of 11.04 seconds and third in the 200 m.

Okagbare competed in the 100- and 200-meter events. She advanced to the 100-meter finals and won in 10.85 seconds, beating Debbie Ferguson, 12-year-old McKenzie’s record established at the Manchester Commonwealth Games in 2002 of 10.91 seconds. By clocking a mark of 22.25 seconds in the 200, Okagbare also took home the gold medal. She did so to become the fourth woman in Commonwealth Games history to win the 100-meter and 200-meter double.

She ran the lead-off leg in the 4 x 200 m race at the 2015 World Relays. In the end, Okagbare, Regina George, Dominique Duncan, and Christy Udoh’s team won the race and, in the process, set an African Record. Due to a hamstring injury, she got while coming in last in the 100-meter final at the World Championships, she did not compete in the 200 metres at the IAAF World Championships or the All Africa Games. She did compete in the IAAF Diamond League event, the Weltklasse Zürich in Zurich, at the end of the season, placing second in the 100 metres. Al Hassan Yakmu, the director general of Nigeria’s National Sports Commission, was incensed by the perceived slight of not representing Nigeria.

Blessing’s performance at the 2016 Rio Olympics was disappointing as she did not bring home any medals. She didn’t go to the final, although she finished third in the 100-meter semifinal in 11.09 seconds and eighth overall with her teammates in the final of the 4×100-meter relay.

After failing a drug test on July 31, 2021, during the 2020 Tokyo Olympics, Okagbare was suspended. On February 18, 2022, it was revealed that she had been suspended from competition in athletics for ten years, starting on July 30, 2021, due to several violations of the World Athletics Anti-Doping rules. After a hearing at the Athletics Integrity Unit determined that she had taken both human growth hormone and EPO over a prolonged period of time and had failed to cooperate with the inquiry, Okagbare was banned for ten years, thereby putting an end to her athletic career in shame. The AIU reported on June 23, 2022, that Okagbare’s suspension had been prolonged by a year due to additional anti-doping violations.

In November 2014, the pair got married in Sapele, Delta State, in a ceremony that was attended by family, friends, and loved ones. It was discovered that Blessing Okagbare started the divorce proceedings, which resulted in conflicts and confrontations between the parties’ families. According to reports, the professional athlete’s family has not yet given her estranged husband’s family their bride price.

Her ex-husband commented on the divorce drama by saying, “She has said all the stories. I don’t have anything to say. I leave everything to God. Thank you. “

She earned a silver medal in the women’s long jump competition at the Beijing Summer Olympics in 2008 when she was just 19 years old. She was chosen to compete at the 2009 World Athletics Championships. However, she didn’t begin in either the 100 metres or the long jump. Okagbare completed a 100-meter and long jump double at the NCAA Women’s Outdoor Track and Field Championship at the University of Texas, El Paso, ending their undefeated collegiate streak. She won the Nigerian 100-meter championship in 2010, clocking a time of 11.04 seconds. She later announced that she was forgoing the long jump to focus on the forthcoming African championships.

She again won gold in the long jump at the 2010 African Championships, clearing 6.62 metres, while her countrywoman, Comfort Onyali, claimed silver. With a time of 11.03 seconds flat, Okagbare won gold in the 100-meter sprint as well. Ruddy Zang Milama and Oludamola Osayomi, both of Gabon, took home silver and bronze with times of 11.15 seconds and 11.22 seconds, respectively. As a member of the Nigerian women’s 4100 m relay team, she took home her third gold medal at the conclusion of the competition. With a time of 43.43 seconds, the team of Agnes Osazuwa, Lauretta Ozoh, Okagbare, and Osayomi broke the previous mark set by the Cameroonian four who won silver.

Okagbare established herself as a 100 m runner in 2011, building on her past achievements. At the 2011 World Championships in Daegu, Okagbare placed fifth in the 100 m final with a time of 11.12 s. She did not, however, advance to the long jump final since her best jump of 6.36 m was not sufficient to move her out of her qualifying group. Her 2011 campaign came to an end with three medals she earned in the All Africa Games in Maputo, Mozambique. She finished second to fellow countryman Oludamola Osayomi in the 100 metres with a time of 11.01 seconds and first in the long jump with a leap of 6.50 metres. She was a member of the Nigerian foursome that finished first in the 4 x 100 m race in 43.34 seconds.

Okagbare had an eventful year in 2012. At the Nigerian championships in Calabar, she leapt 6.97 metres in the long jump. In Porto Novo, 2012, she earned fresh continental medals in the African Championships. She defeated Zang Milama for silver in the 100 m, but she won gold in the long jump with a leap of 6.96 m.

Blessing has an estimated net worth of $5 million.