Ngozi Sonia Okobi-Okeoghene (born December 14, 1993) is a professional footballer from Nigeria who plays as a forward for Swedish club Eskilstuna United DFF and the Nigeria women’s national team, Super Falcons. 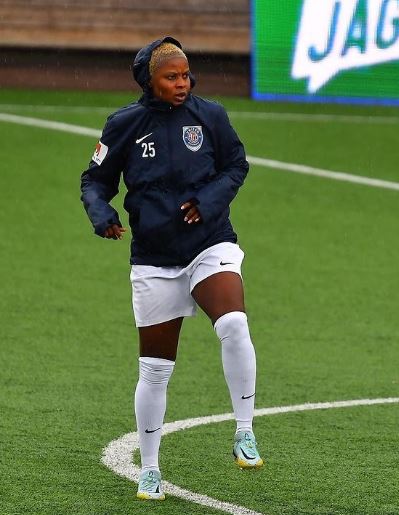 Ngozi Okobi was born on the 14th of December, 1993, in Delta State, Nigeria. She grew up in the Southern part of Nigeria.

Ngozi Okobi became the third Nigerian to join a National Women’s Soccer League team in 2015, behind attacker Francisca Ordega and the second in the World Cup, behind defender Josephine Chukwunonye, when Washington Spirit announced her signing from her hometown club, Delta Queens of the Nigerian Women’s Championship, on June 23, 2015, for an undisclosed fee. Okobi was released by the Washington Spirit on January 6.

She featured in the teams in the Super Falcons senior level competitions at the African Women’s Championships in 2010, 2012, and 2014, winning two of them. She participated in the 2015 FIFA Women’s World Cup for Nigeria as well.

Ngozi Okobi has been a member of the Nigerian national team since 2008, albeit with the under-17 squad. In 2010, she received her first senior call-up immediately following the U-17 tournament. At the 2014 African Women’s Championship, she scored her maiden goal against Zambia, helping Nigeria thrash the hosts 6-0.

Ngozi Okobi has an estimated net worth of $1 million. She accumulated her wealth from playing professional football.