Blessing Oborududu is a freestyle wrestler from Nigeria. She is now listed as the second-best female wrestler in the world and the first to represent Nigeria and win an Olympic medal in a wrestling event. From 2010 until 2020, she won the African championship ten times. Blessing also won gold in the Women’s Freestyle 68kg category at the 2022 Commonwealth Games. 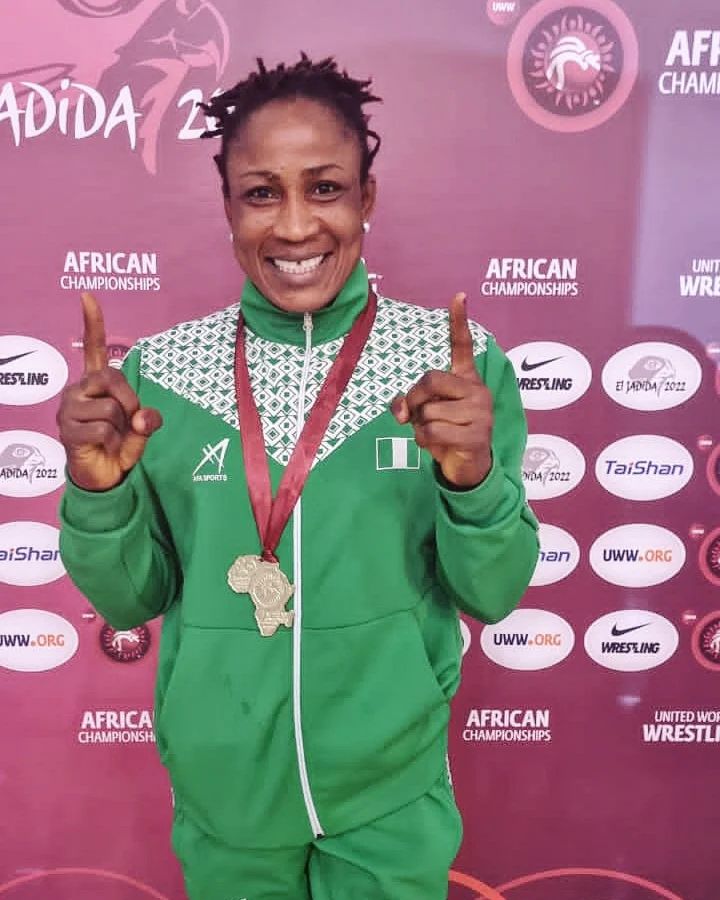 Blessing Oborududu was born on March 12, 1989, in Gbanranu, Bayelsa State, Nigeria. Blessing had her primary and secondary school education. She attended Saint Jude’s Girls Secondary School, Amaratan, Yenagoa in Bayelsa State. While still in school, she started her amateur wrestling career during an inter-house sports competition before being invited to the national camp.

Blessing has always had aspirations to compete in wrestling, but her parents strongly discouraged her from pursuing her dream of being a wrestler, believing that men should exclusively participate in the sport. People in the neighbourhood bullied and discouraged her as well. As a result of her skills, she was invited to the national camp in 2007.

Blessing has won a gold medal every year in the African Wrestling Championships since she started participating in 2010, with the exception of 2012, when she opted not to compete because she was taking part in the Summer Olympics. In the freestyle 63 kg competition at the 2012 Summer Olympics, she lost to Monika Michalik in the 1/8 finals.

She defeated Danielle Lappage of Canada to win the gold medal in women’s freestyle wrestling at the 2018 Commonwealth Games in Gold Coast, Australia. She qualified for the 2020 Summer Olympics in Tokyo, Japan, at 2021 African and Oceania Wrestling Olympic Qualification Tournament. She also earned the silver medal in her competition at the 2021 Poland Open in Warsaw, Poland, in June of that year.

After losing 4-1 to Tamyra Mensah-Stock of the United States in the women’s freestyle 68 kg final at the 2020 Summer Olympics, she took home the silver medal on August 3, 2021. She made history by becoming the first wrestler from Nigeria to win an Olympic medal. She ultimately grabbed the first silver medal for Nigeria at the Olympics in Tokyo. She also earned the gold medal in the 68 kg division of the Istanbul, Turkey-based Yasar Dogu Tournament in 2022 by defeating her Kyrgyz rival Meerim Zhumanazarova 3-2. At the 2022 African Wrestling Championships in El Jadida, Morocco, she took home the gold medal in her division. At the Matteo Pellicone Ranking Series 2022 in Rome, Italy, she earned one of the bronze medals in her competition a month later. At the 2022 Commonwealth Games in Birmingham, England, she took home the gold medal in the women’s 68 kg competition.

Blessing is one of the best wrestlers in the world and also in her category, alongside Odunayo Adekuoroye. However, her relationship status is unknown.

She idolises former wrestler Daniel Igali, a Canadian-Nigerian who was formerly thought to be the first person from Nigeria to win an Olympic medal, and he also inspired her to be a wrestler.

Blessing Oborududu’s net worth is estimated at $2 million.